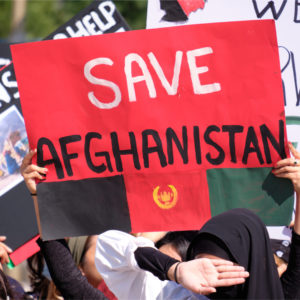 Each day, new revelations emerge about what Joe Biden has done or failed to do in the Afghanistan debacle. We now know from a leaked conversation with Afghani President Ghani that Biden knew the Afghan Army would collapse quickly when the USA announced its exit. Biden knew that chaos would ensue a month-and-a-half before it happened, but instead of doing something about it, he chose to lie instead. For six weeks he was completely aware of our impending disaster but did nothing to mitigate it. Six Weeks!

During that time, neither Biden nor the State Department told American citizens to leave the country. Why would they fail to do that? They didn’t contact the kids in California and tell them to cancel their field trip either. Instead, the Biden White House and State Department knowingly put these young students in harm’s way, perhaps signing their death warrants. Instead, these students have been abandoned in Afghanistan. Why would any U.S. President do such a thing?

Instead of using those six weeks to either remove billions of dollars worth of state-of-the-art military equipment, disable or destroy it, they waited until it was too late to do anything about it. Why would Biden or the Pentagon allow a situation like this to happen? By failing to act, with seized U.S. weaponry, the Taliban has now become a formidable army. Enabling this to happen is definitely not in the best interest of the United States or any of our allies in the region.

Biden didn’t even give our allies a “heads up” about what was going to happen either, did he? No, he certainly did not. Because he didn’t, none of them will trust us the next time we need them, will they? No, of course they won’t. Can you blame them? Would you trust a nation being led by a deceitful sneak like Biden? I certainly wouldn’t.

So, where are we now that Biden has allowed all of this to happen? For one thing, we have left Americans behind in Afghanistan, and we are clueless about how many. Our feckless State Department has washed their hands of them, telling these American citizens they are on their own. It’s the same situation for the Afghanis who worked with the USA. Having left most of them behind too, they are living on borrowed time, waiting for the Taliban, which is going house-to-house to hunt them down.

While this has been happening, in the USA, the deceitful spin from Biden, his complicit State Department and Pentagon, is that our extrication from Afghanistan was a roaring success. What nonsense. Do they really expect us to believe this? Do they actually think we are that stupid?

What we have just witnessed is a debacle of monumental proportions, and we know it. Even worse, all of it could have been prevented. Millions actually believe Biden did this on purpose, fulfilling his obligations to China for the billions they gave to fund Biden’s perverted drug-addict son, Hunter. Whether this is true or not will never be known, but one thing is for sure. Although the Democrats in the House of Representatives were perfectly willing to Impeach Trump over a telephone call, they are equally as unwilling to Impeach Biden over leaving American citizens and weapons behind, lying to the American people about it. What a disgrace this is for our beloved nation. It will take us decades to live this down.