Skip to content
In The Senate, Let Trump Have His Day in Court 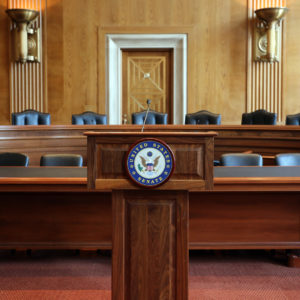 Despite the House Judiciary Committee’s determination to vote for two articles of impeachment against President Trump today, this has arguably been the best week of his Presidency. Here are the specific reasons why this is true:
—The November jobs report was outstanding. In addition to adding 266 thousand new jobs, the previous two months were revised upward to add an additional 41 thousand jobs, nearly doubling the projections.
—After delaying the USMCA for nearly a year, the Democrats in the House have finally ratified it, making it the largest trade agreement in world history.
—Phase 1 of the China Trade Agreement was finalized, which will help normalize international trade.
—Responding to all of this outstanding economic news, the markets are going through the roof. If you have a 401k or an IRA, you are doing very well for yourself.
—With Boris Johnson’s victory in the UK, a positive trade deal with the UK isn’t far away.
Clearly, Trump’s economic policies are winning and all Americans are benefitting from them. Despite this, the House Democrats are certain to impeach the President before Christmas, but neither of the two charges they are levying are substantiated with a crime, which is the Constitutional mandate. Nothing like this has ever happened in American history.
When the Senate takes up these charges, both Mitch McConnell and Lindsay Graham have said they intend to deal with them quickly, barely giving them the time of day. I believe this is a mistake.
Instead, the Democrats should be forced to defend what they have charged, and the President should be able to call witnesses to defend himself. The American people should see for themselves that the Whistleblower coordinated the impeachment effort with Rep. Adam Schiff’s staff in an orchestrated effort to “get President Trump.” The American people should also hear from Hunter Biden. Under oath, let’s see what he did for the millions he was paid. Expose the corruption.
When all of this is exposed to the light of day, the Democrats will rue the day they launched this coup against the President. Next November they will be repudiated soundly at the ballot box.
Jack Watts
Posted in Articles, Government and tagged court, impeach, trump