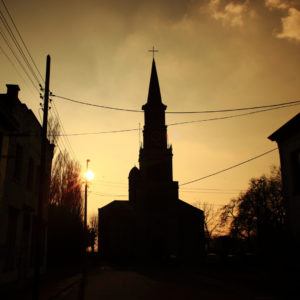 I produced the last mailing Jim and Tammy Faye Bakker ever did. It was a Spring Catalog of products to follow-up the Christmas Catalog that had been very successful. The catalog began dropping the day the scandal broke at PTL. This is why, when I watched The Eyes of Tammy Faye a few days ago, it triggered many difficult memories for me.

Before I actually knew what was happening, on the morning of the scandal, I was on a Delta flight at 7 a.m., headed for Charlotte. Every seat was filled with people from the media, all wanting to get to PTL for the story. My biggest concern was getting paid. PTL owed me more than $100,000 for the catalog.

By the time I arrived in Fort Mill, I was furious, ready to read the riot act to everybody in the marketing department. With hundreds of people from the media outside, I was allowed to enter the PTL World Headquarters. Walking straight to my main contact’s office, when I walked in, I saw a look of devastation on my contact’s face that I will never forget. Instead of being angry, I sat with him and comforted him as a friend.

The movie focused on Jim and Tammy Faye, but all I saw was the carnage they left in their wake of their fraudulent dissipation. In the years that followed, none of the marriages of the Bakker staff survived, at least none that I knew. With their vision having been crushed, these good people became unrestrained. Alcoholism, drug addiction and adulterous behavior became rampant.

This was very difficult for me to witness. It’s why I wrote, Recovering from Religious Abuse, which Simon & Schuster published ten years ago. It was to help those who have been used, abused and discarded by devious religious leaders. Most people believe that taking the Lord’s name in vain is saying, “God dammit,” but that’s not true. It’s more than being profane. It’s when someone like Jim Bakker uses God’s name to further his own twisted, perverted agenda, destroying the lives of many, alienating them from God.

The way the movie depicted Tammy Faye was spot on, but Jim was far more devious in my opinion. Also, Jerry Falwell was much more personable than the movie depicted him to be. By the way, I eventually got paid for my catalog, which was very successful.