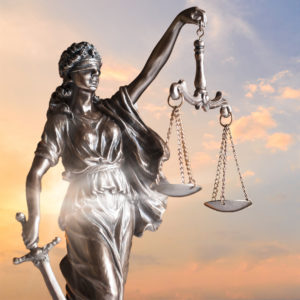 When most of us were growing up, we learned that the American system of justice was founded on the unshakable principle that nobody, regardless of who that person might be, would be considered above the law. The image of the blinded woman holding up a balanced scale was indelibly grained into our minds. We loved it. It was so noble and inspiring.

This belief appeared to be accurate for a very long time but, in the past half decade or so, millions of Americans have come to believe we have devolved into a two-tiered system of justice. There are one set of rules for the political elites, Deep State operatives and corrupt bureaucrats. Like the entitled nobility in a European monarchy, their American counterparts operate similarly. “Our Betters” can do whatever the hell they please without fear of being held accountable. Amassing immense fortunes through corrupt means, “Our Betters” have become accustomed to fleecing us for so long that they actually believe they are entitled to behave this way. For us to even challenge their entitled status is unacceptable. They have become this arrogant.

Because both Democrats and Republicans are guilty of this. Although they may squabble about other things, they are mutually supportive of their right to financially rape the American people. How else could they be paid so moderately, while retiring with massive fortunes?

In our way of thinking, the second tier of justice has been established for the rest of us. What we are held accountable for, “Our Betters” are not. We have thought this was the way things have been operating for quite a while, but I no longer believe this is an accurate assessment.

Instead, I have come to believe that we don’t have any system of justice at all. Instead of seeking justice, our judicial system does little more than rubber stamp corruption, validating it as being legitimate. If I’m wrong, then how is it that the FBI has been enlisted to target average Americans for wanting to have a voice in the children’s education? If I’m wrong, they how can you explain OSHA being weaponized to terminate the employment of those who refuse to comply with their unlawful vaccine mandates? The IRS has certainly been weaponized against us.

There are hundreds of examples. The list goes on and on. In the third decade of the twenty-first century, which is where we are right now, the USA has ceased to be a just nation. Even worse, this is what “Our Betters” desire—a plutocracy of the rich and entitled. Those who have usurped power over the American people intend for it to stay this way. In their contempt for you and me, they believe we are powerless to do anything about it, but they are wrong. When the majority of Americans begin to understand what is happening, when they begin to realize their nation has been stolen from them, then there will be a terrible price to be paid by “Our Betters” and those who have usurped power over us. If you think I’m mistaken, just keep your eyes open and watch.