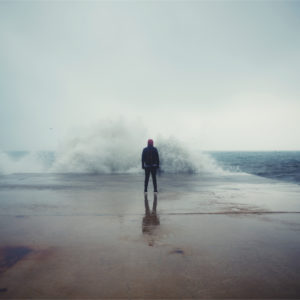 “Why is he sleeping? I don’t understand. He has been sleeping for a half-hour while we have been watching this storm come across the lake. Look at those waves. Andy, have you ever seen them this rough? Every time I look, they get higher and higher.” With panic in his voice, Peter cried, “I don’t think we’ll make it to the shore. Wake him up. Would someone please wake Jesus up?”

My dad was visiting friends in the Philippines when they decided to take a ferry to a nearby island. At the same time, a typhoon was rolling across the islands, and my dad’s afternoon ferry trip became four days on a churning sea. The wind and rain beating against the ferry and the shortage of food caused an epidemic of fear that was very contagious.

Several hundred people, including many children, were forced to ride out the storm on the unsteady sea. My dad played his harmonica for hours, and then each night, he laid down and slept, while others stayed awake anxiously, fearing for their lives. Someone asked him how it was that he could sleep during such a dangerous and tumultuous situation. His answer? “I’ll wake up in one of two places. I’ll either wake up in heaven or still on this boat. I might as well sleep.” And he did.

Both Jesus and my dad were at peace, not just resting. Because they had peace, they could sleep without fear. Today fear has gripped hearts and twisted emotions until they are raw with anxiety. Worrying about the future, and fearful of the unknown has left many panicked and afraid. Like a typhoon stirring the sea, their thoughts churn inside them until they are scared to close their eyes for fear that their nightmares might come true. Many are lying awake at night, unable to sleep. Stress levels have increased, and suicides are on a new high. Some areas have had a year’s worth of suicides packed into just four weeks, while others have had more suicides than deaths from COVID.

In Psalm 127, the psalmist writes that only the Lord is qualified to keep watch over a city. Any other guardian watches in vain. Yet we lie awake at night, thinking if we keep watching, we will be prepared for the unknown. Oh, my dear friends, close your eyes and take a deep breath. Lean back and rest. Allow yourself to sleep. You will either wake up here in this life or heaven. If you wake up here, you will be rested and able to face your day. If you wake up in heaven, well…GLORY!

And a great windstorm arose, and the waves were breaking into the boat, so that the boat was already filling.  But he was in the stern, asleep on the cushion. And they woke him and said to him, “Teacher, do you not care that we are perishing?” And he awoke and rebuked the wind and said to the sea, “Peace! Be still!” And the wind ceased, and there was a great calm.

Unless the LORD watches over the city, the watchman stays awake in vain.  It is in vain that you rise up early and go late to rest, eating the bread of anxious toil; for he gives to his beloved sleep. ESV