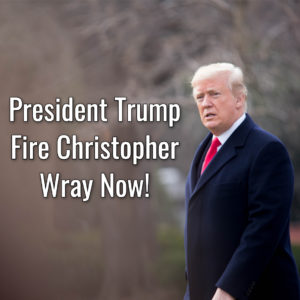 Although Wray is a much better choice than the criminal, James Comey, Wray has been an enigma. At first heralded as the man who would restore integrity to the FBI, Wray has not lived up to his billing. Instead of ferreting out the criminal element in America’s secret police, Wray has been far more invested in protecting wrongdoers and concealing the truth about the FBI’s activities than anything else.

He probably believes he is doing the right thing by covering up wrongdoing and slow-walking court-ordered documents about the FBI’s pattern of lawbreaking, but he’s wrong. Although people like me have been calling for accountability for Comey, Strzok, Page, Priestep, McCabe and others for several years, it’s never happened, has it? Granted, these people have lost their jobs, but none of them have lost their freedom, have they? No, they haven’t.

And why is that? It’s because they have been protected—shielded from accountability—by people like Director Wray. Obviously, Wray believes he is doing his job by trying to protect the pristine image of the Bureau, but that’s like trying to make Mother Teresa out of a whore. It’s not possible.

The FBI is so riddled with criminals that only a fool would take the word of an agent at face value. Nevertheless, Wray protects the criminals rather than exposing them. Where candor and full disclosure are required, we, the American people, have received the exact opposite. We continue to be fed lies and misdirection by the FBI.

What we need is a purging of the FBI, beginning with Director Wray. His flawed leadership is irredeemably tarnished, which means he must be replaced. President Trump should fire him immediately. My suggestion is to name Trey Gowdy, a man of integrity, to replace him. This is the only way to get to the bottom of the FBI’s corruption. We’ve waited years for justice; we shouldn’t have to wait any longer. Mr. President, get rid of Wray now!