COMMON SENSE: On Friday night, Speaker of the House, Paul Ryan, and the chairmen of several House committees met with Deputy Attorney General, Rod Rosenstein, and numerous officials from the FBI and the DOJ. The purpose for the meeting was for Speaker Ryan to issue an ultimatum to the DOJ for them to release relevant documents required by the House for its Constitutional oversight responsibilities.
The importance of this meeting cannot be overemphasized. It’s one thing to stonewall Chairman Nunes, Chairman Gowdy, and Chairman Goodlatte, but it is quite another to stonewall all three, especially when they have the backing of the Speaker of the House.
Rosenstein and his subordinates have refused to provide essential documents to the House 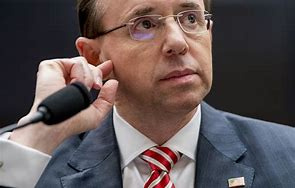 committees for a year, hoping to run out the clock. Their goal has been for the House to flip to the Democrats in the November elections. If that happens, then the investigation into malfeasance and corruption by the Obama administration would stop dead in its tracks.
Unfortunately for Rosenstein, his time of non-compliance has run out. If the DOJ and FBI do not turn over the required documents this week, the entire matter will be brought to the floor of the House of Representatives for action. This is not an idle threat or a slap on the wrist. The House has real power. Rosenstein will be cited for Contempt of Congress. He might even be impeached. Either way, this will provide President Trump with the justification he has needed to get rid of Rosenstein, and perhaps even Attorney General Jeff Sessions.
But what is behind all of this, you might ask. Rosenstein’s refusal to provide the required documents is because there never has been proper documentation to launch the investigation into Donald Trump or the Trump campaign. Because there was no proper foundation—no investigative predicate other than an order from the Obama White House to do so—there has also been no legal foundation for what has transpired since, including the appointment of Special Counsel, Robert Mueller to investigate Trump’s collusion and obstruction. The Russian meddling is an entirely different issue.
Without proper legal foundation, which either does not exist or is fundamentally flawed, everything that has come since is “fruit of the poisoned tree.” Even if Trump has been guilty of colluding with the Russians, for which there has been no evidence, it would not stand up in a court of law.
Rosenstein, who is deeply complicit in the scheme to illegally have President Trump removed from office, has done everything he can to aid this cabal, but now his time has run out. He has come to the end of this plot, which has failed. His militant obstructionism has finally met its match. His name is Speaker Paul Ryan. Although it required a while for Ryan to get onboard, the power of his office will finally bring this stalemate to a conclusion. The American people will finally know what really happened—at least those who are willing to pat attention.
Posted in Articles, Government