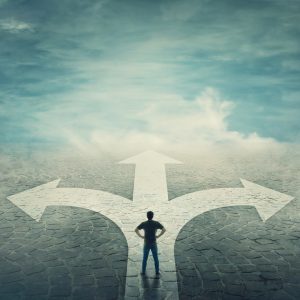 The servant of a faraway king, stood before King Hezekiah, shouting for all the people to hear, “Listen up you people.  Your king can not save you.  Your army is defeated.  There is no hope.  You will die in the streets and your children along with you.  Lay down your arms.  Even your God can not rescue you from me and my army! He has abandoned you.”

As fearful as they were, no one said a word.  Not a man, woman, or child responded to the arrogant man facing them.  They stood at a crossroads.  Was the enemy right?  Had God abandoned them?

The king himself was shaken down to the souls of his feet and in fear, he ran to the house of God.  “Oh God, save us from this man and his evil king.  Deliver us so all the world will know that you are God alone.  Don’t let us be ashamed, oh God.  Remember your people.”   When he had finished praying, he called for the prophet.

The man of God responded, “Don’t be afraid.  God has heard your prayers.”  He continued, “Listen, people of God, this is what the Lord has to say about what is going on.  The enemy has not only mocked and insulted you but he has come against me, the Holy One of Israel.”

Then facing the servant of the faraway king he said, “This is what God, OUR GOD has to say.  You think that I don’t know what is going on?  You think that I don’t see?  I hear your haughty words.  I will turn you inside out.  Your own people will devour each other.  I still have a people, survivors who still trust in me.  People that I have not forgotten.  My love for them will be their weapon.  I will defend them.  Watch and see!”

It was a defining moment for the people of God.  It was there, that God defeated a kingdom much greater then they were, all because they were his people, and he loved them.

We too, stand at the crossroads of a critical moment in history.  Many are afraid as they hear the words of the enemy.  And because of that fear they have been caught up in debate, trapped in a war of words, that spins tales of hopelessness and fear.  Perhaps we too should stand in silence, trusting that God will defend us.  Yes, this is a defining moment.  Much like the people of God in King Hezekiah’s time, we also face an enemy the seems greater, more powerful, and infinitely more resourceful than we are.  Current situations have caused many to fear and wonder does God even care?

This is His response, “Don’t be afraid.  I have heard your prayers.  The enemy has not only mocked and insulted you, but he has come against me, the Holy One of Israel.  You think that I don’t know what is going on?  You think that I don’t see?  I hear the haughty words.  I will turn those who work against me inside out.  They will turn from you and devour each other.  I still have a people.  People that I have not forgotten.  My love for them will be their weapon, and they will not be ashamed.  I will defend them.  Watch and see!  Watch and see!  THIS IS A DEFINING MOMENT! ”

And Moses said to the people, “Fear not, stand firm, and see the salvation of the LORD, which he will work for you today. For the enemy whom you see today, you shall never see again. The LORD will fight for you, and you have only to be silent.”

“Therefore thus says the LORD concerning the king of Assyria: He shall not come into this city or shoot an arrow there, or come before it with a shield or cast up a siege mound against it. By the way that he came, by the same he shall return, and he shall not come into this city, declares the LORD. For I will defend this city to save it, for my own sake and for the sake of my servant David.”