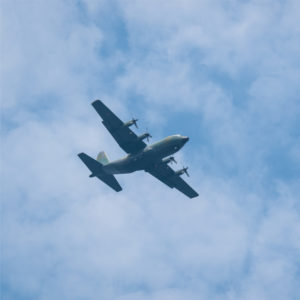 As we know we are in a spiritual battle in epic proportions. Having served as a United States Marine from the years of 1996-2003, the Lord speaks to me in dreams. At times I receive the interpretations. Several days ago, the Lord woke me up right at 5:55am and He spoke to my spirit, “its beginning,” I then proceeded to go to my prayer closet and pray. I will release the dream as it came. This has been the battle between good and evil and the end times message. Evil will be called good and good will be called evil.

Beginning of the dream,

I was buying a laundromat from Kamala Harris. Then the dream shifted where me and a large group of people were on a flight line and from a far distance five (five is the number of grace) LARGE government planes were flying by in unison on the flight line. I mean they were the largest government planes the government has like the cargo planes.

The first plane had a person drop out, but he survived the fall and possibly the attempt to be killed. I saw the white man holding on to the duffle back. I walked up to him and I saw him from the back and he was completely naked with blond hair.

The five (grace) government planes (transition or change) are regarding the government and many things have to be cleaned up and there are many that will be thrown out. It will be a battle due to the blood and the nakedness of the man is that we will be able to see what is going on because of the perspective of being far away. I have pondered this dream for a while because I had it right after the November 3rd elections.

Again, as I began to pray I began to pray and cry. At this time, I began to wipe the tears from my eyes and really rub them hard. The Lord spoke to my spirit “scales.” Immediately, I received two interpretation, the Spirit of Ananias who went to deliver Saul on a street called straight to lay hands on his blinded eyes.

THE CHURCH HAS BEEN PERSECUTED AND JESUS WILL COME TO INTERVENE.

There have been persecutions towards the believing individual and the church in various areas around the world. God blinded the eyes of a few so that He can unblind many all at the same time. Saul was on the way to Damascus. In Acts 9:1-4, the Word of the Lord shares, “Then Saul, still breathing threats and murder against the disciples of the Lord, went to the high priest and asked letters from him to the synagogues of Damascus, so that if he found any who were of the Way, whether men or women, he might bring them bound to Jerusalem. As he journeyed, he came near Damascus, and suddenly a light shone around him from heaven. Then he fell to the ground, and heard a voice saying to him, “Saul, Saul, why are you persecuting Me?”

God is in control. He’s the one who brings calamity. Calamity is in my spirit this morning. Calamity…grievous affliction; adversity; misery: the calamity of war. Why?

And suddenly the light will be shone around many. The light of the Lord will shine through men. Deuteronomy 32:35 “Vengeance is Mine, and recompense; Their foot shall slip in due time; For the day of their calamity is at hand, And the things to come hasten upon them.” NKJV.

“Oh, that my grief were fully weighed, And my calamity laid with it on the scales! Job 6:2 NKJV.

“I form the light and create darkness, I make peace and create calamity; I, the LORD, do all these things.” Isaiah 45:7 NKJV. I received two interpretations on scales on Thursday 1/14. The “scales” of justice are at hand. The “scales” of blinded eyes are going to fall off.

ANANIAS WAS CHOSEN FOR THE CHOSEN.

Ananias was chosen by the Lord to go lay hands for healing the blinded eyes of Saul who had been persecuting Christians. Yet, the Lord would use him to be his chosen vessel to bring the gospel to many. The scales will come off of many so that they may be healed and receive their sight.

“Now there was a certain disciple at Damascus named Ananias; and to him the Lord said in a vision, “Ananias.” And he said, “Here I am, Lord.” So the Lord said to him, “Arise and go to the street called Straight, and inquire at the house of Judas for one called Saul of Tarsus, for behold, he is praying. And in a vision, he has seen a man named Ananias coming in and putting his hand on him, so that he might receive his sight.” Then Ananias answered, “Lord, I have heard from many about this man, how much harm he has done to Your saints in Jerusalem. And here he has authority from the chief priests to bind all who call on Your name.” But the Lord said to him, “Go, for he is a chosen vessel of Mine to bear My name before Gentiles, kings, and the children of Israel. For I will show him how many things he must suffer for My name’s sake.” And Ananias went his way and entered the house; and laying his hands on him he said, “Brother Saul, the Lord Jesus, who appeared to you on the road as you came, has sent me that you may receive your sight and be filled with the Holy Spirit.” Immediately there fell from his eyes something like scales, and he received his sight at once; and he arose and was baptized. So when he had received food, he was strengthened. Then Saul spent some days with the disciples at Damascus.” Acts 9:10-19 NKJV.

TO THE CHURCH JESUS SAID HE WOULD BUILD WITH POWER

To the church that Jesus said He would build, and the gates of hell would not prevail against it, Arise and shine. Like Saul who became Paul, many they come to your brightness rising. “Arise, shine; For your light has come! And the glory of the LORD is risen upon you. For behold, the darkness shall cover the earth, And deep darkness the people; But the LORD will arise over you, And His glory will be seen upon you. The Gentiles shall come to your light, And kings to the brightness of your rising.” Isaiah 60:1-3 NKJV. In Jesus name Amen