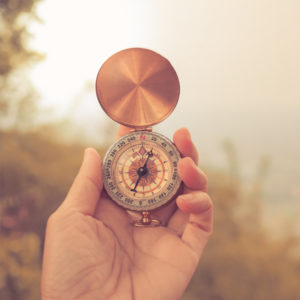 I’m not going to say it was an audible voice, but when it wakes you up in the middle of the night, it sure seems like it. I heard these words, “For all who are led by the Spirit of God are sons of God.” A familiar Scripture found in Romans 8:14. It got me digging. The meaning of the word “led” is powerful. It means to lead by laying hold of, to bring to the point of destination. Wow! If you are God’s child, His Spirit–who lives in you, by the way–will lead you by taking hold of you and bringing you to a specific point of destination. Now, that sounds great, but what we need to realize is that we must cooperate with His leading. The Holy Spirit is not going to drag you anywhere kicking and screaming. A few days later I saw this play out in living color.

I had a craving for Alessi Tuscan Soup, but alas, none in the pantry. I drove to the grocery store and once I was there, I had another craving–lime yogurt. Now that I think of it, it actually sounds gross together, but I learned later it was all a set up. You see, as I walked completely to the other side of the store for the yogurt, I had to pass by the pharmacy. There sat an elderly lady, obviously waiting for a prescription to be filled. With only her eyes visible over top of her mask, they looked sad…or lonely…or both. I kept heading for the yogurt, but about three steps after I passed her, my feet stopped moving. Yep, the Holy Spirit took hold of me–just like Romans 8:14 talks about.

God wanted that sweet, lonely-looking, elderly lady to be ministered to. I remembered that I had some Gospel tracts in my purse. I pulled one out and made sure it wasn’t crumpled from being in the bottomless pit of my purse or that it didn’t have a Tic Tac stuck to it, turned around and approached this precious soul. Instead of fear in her eyes that a stranger had boldly walked up to her, I saw excitement–a look of “Yes, someone is going to talk to me!” That was all I needed. She gladly received the tract and I got to tell her how special she is, to which she happily responded. I couldn’t see her smile through the mask, but I now saw a twinkle in her eyes.

When I got home, do you know I didn’t even make the soup. I’m talking about a soup I love, a soup I eat often. I just put it in the pantry–the craving was gone. It was then I heard the still small voice inside of me: “I didn’t send you to the store for the soup, I sent you to that lady.” Wow, I was on a mission disguised as a grocery store shopper! I love it!

Coincidentally, a short time later I picked up a book I have been reading and found a story about a man who felt impressed to go to a certain hospital. It came to his mind that someone he knew was a patient there, so he hurried off to visit him. But as he sat by his bedside, he realized this was not who he was sent to. It was then that he noticed another man across the hall who was in for a simple knee repair. He witnessed to him, leading him to the Lord. That night the man crossed over into eternity.

When you are sent somewhere by the Holy Spirit, you are also given the authority to carry out the mission He sends you on.  Listen, you are not in this by yourself. The third person of the Godhead–the one whose function it is to create–not only leads you, but accompanies you and anoints you for the assignment.

That means you can be bold! You don’t have to act all scared and squirrely.  You have the Lion of the Tribe of Judah living inside of you. The apostles went out to each assignment knowing who was leading them. You should be the same way! Go! Go big! Go bold! When the Holy Spirit sends you, He will give you the words, He will get you to the right place, He will tell you what to do and who needs His touch.

Are you God’s child? Then having Him lead you and bring you to the point of destination should be a daily occurrence, because those who are led by the Spirit of God are the sons of God. Once you say yes to the Holy Spirit, you are already in the river with Him, now just take your floaties off and wade out into the deep waters!