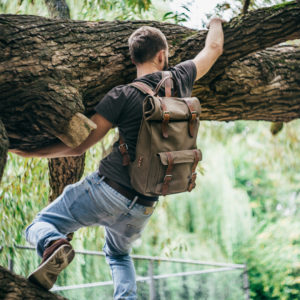 He was running just as fast as his short little legs would go.  Around the corner, past the widow’s house and then across the vacant lot he went, huffing and puffing the whole way.  He wasn’t exactly athletic, and the few extra pounds across his midsection definitely weighted him down. His lungs ached for him to stop, and catch his breath, yet he never even paused.  Ever since he had heard the rumors in town, he had to see for himself if the stories were true.

Suddenly he was stopped dead in his tracks.  “No!” he cried.  He had come so far, and yet there was no way he could get close enough.  Before him was an enormous crowd.  It looked as if half of the town was right in front of him, blocking him from getting any closer.  He jumped up and down, and tried to squeeze by, but there was nothing he could do.  He was too far back to see anything.   Then he saw it.  Just off to the side grew a sycamore tree.  It’s large patchy trunk reached out just over the crowd.  If he could climb it, it would take him straight to the front.  His first few attempts to jump up onto the lowest, crisscrossing branches failed, but he didn’t give up.  “Finally,” he muttered as he scooted across the shady branches.  It wasn’t long before he was right over top of the man he had come to see.

No one seemed to notice the little man peering down from above until Jesus looked up and called attention to him.  Did he hear the words right!  Was Jesus calling him by his name?  It seemed like no one ever called him by his name anymore.  The entire town had derogatory names they called him, Cheater, Thief, or Traitor were the most popular.  He was the tax man and everyone hated him.  And yet, the teacher knew his name!

“Zacchaeus!  Come down from that tree.”

At first he didn’t move.  He could hardly believe that Jesus was talking to him, and yet he was the object of the man’s attention.

“Zacchaeus?  Did you hear me?  Come down.  I’m going home with you!”  Shinnying back, across, and down the limbs Zacchaeus, came.  He would never forget that day as long as he lived.  Every detail was burned upon his memory.  God knew his name.  He would never be the same.

Today, with all of our sophistication and technology, we have become a faceless, nameless society.   Even the rich and powerful have been reduced to a list of letters and numbers.  User-names and passwords hide our true identity.  And should we be discovered by hackers, we quickly change our information, adding a more complicated password, to ensure that no one knows who we are.  And yet we all need to be known, understood, and loved.

Did you know God knows your name?  He sees you as you try to find him, and knows when you are misunderstood, forgotten and rejected.  Yet, he has not forgotten you.  He understands you and wants to be in a personal relationship with you.  Imagine it is you up in that sycamore tree.  Imagine that it is you he has called by name.

Jesus is looking at you right now and he is calling.  “Come down.  I’m going to your house today!”

And when Jesus came to that place, he looked up and said to him, “Zacchaeus, come down quickly, because I must stay at your house today.”

So he came down quickly and welcomed Jesus joyfully.